Early this year, I decided to close up the recording studio and video production facility that I had been operating for 40 years and downsize to a home studio. The building I had been renting was occasionally up for sale, and even if I could stay, it needed a major facelift.

The recording and video business had changed radically over the years with the availability of high-quality, low-cost equipment and the proliferation of home studios. Anyone with an iPhone thought they were a video producer. I was tired of the rat race and wanted to produce some educational products to share my knowledge of the industry with the multitudes of people now doing their own recording. This blog is the first move in that direction.

Danielle and Chris from “Even the Jackals” during the last session at the old studio. Tomorrow we’ll start removing the equipment.

My video editing suite and office have been moved into a spare bedroom at home and are operational, so what remains now is the tougher task of building a new audio mixing and mastering room in the basement at home and adapting my rec room to function as a recording space.

The next bunch of blog posts will talk about building a home studio as I go through the process including the thought process, compromises that needed to be made and some details of the construction process. After that, we intend on producing a series of blog articles and videos on choosing and using microphones and recording techniques specifically aimed at home studio and small commercial studio owners.

But right now we are finishing up our last session at the old studio mastering an album for Even the Jackals. This is a great album and I am happy to be part of it. We’ll finish our last session tonight and tomorrow we’ll start removing the equipment and storing it in my garage for a month or two until the new room is done. Sony Sound Forge and CD Architect are installed in my new video editing room, so I can make a few more tweaks to the album if necessary. 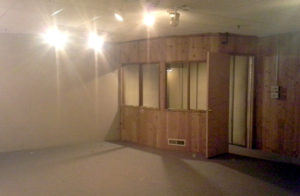 Here we are, a few days later and all of the recording equipment has been removed and safely stored in my garage.  I haven’t seen the studio empty in 20 years and it is a strange view.

So here’s a quick photo for posterity and then on to designing and building a new mastering and recording space and writing about the process for the next generation of recording engineers and producers.

In the next blog post, we’ll talk about the design of the new spaces and the compromises we had to make.

After that will be a series of articles detailing our construction and outfitting process and an evaluation of the results.