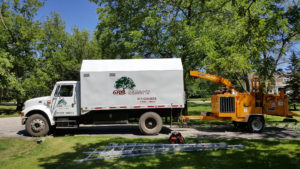 I was aware of the possibility that I would occasionally have a problem with recording due to external noise that was beyond my control. It could be a lawnmower, chainsaw or any of a variety of outdoor tools and appliances, and it could happen at any time. I hadn’t had an opportunity to gauge the amount of threat that existed. Until last week.

There were several large maples and a pear tree that were shading my garden so much that I soon wouldn’t have enough sunlight to grow vegetables, so I contracted to have the trees removed. The crew worked quickly and efficiently and once enough of the trees were down, it was time to grind up the branches.

They parked the large chipper in my driveway, which put it 15-20 feet from my basement control room. If you have never been near an operating wood chipper, they are one of the loudest mechanical devices you will ever encounter. This machine would be the ultimate test of sound isolation for my new studio.

Once the engine was going and they were grinding branches and limbs on a continuous basis, I headed for the basement. I sat in the control room with the chipper less than 20 feet away, and although audible, it would not have been disruptive to a recording or mixing session.

I went out to the studio and listened. If I listened really hard, it was just barely audible. I can’t think of any close-miking situation where the sound would have gotten into the recording. That was excellent news! I was convinced that no matter what is going on outside, recording or mixing wouldn’t be disturbed. After this, if any outdoor sounds disrupt a recording session, I know that I probably have a lot bigger problems than an interrupted session.

When I decided to move my studio home, I knew that I would be facing many compromises, the largest being that I would only be able to record a few musicians. I thought that drums might be a bit iffy and that any choir recording would be out. Nevertheless, Gary had a couple of projects in the works, one for Rory cooney and another for Tony Alonzo, so we decided to push the limits and see what we could get away with in my rec room.

The first gig was drums. Randy Carpenter came up from Louisianna to play drums on the album. We set up the drums and miked the set and just using the two overheads and the kick mike, an Audix D6, got a really nice sound. We miked the rest of the set and were extremely happy with what we heard.

A few days later we recorded the choir tracks for several albums. We have a 12 voice SATB choir. We gathered them around the four microphones, one for each section. We tried a couple of tracks and I was ecstatic. The sound was clean and uncluttered. There was sufficient separation between the microphones and everyone loved working in this space. They all thought they could hear better and all thought it was more comfortable to work in as compared to the old space. The parking was a lot better also!

So we are happy. The studio will be much more useful than I could have hoped for. I’ll still plan on doing some more tweaking with the sound treatment and with the arrangement of the room, but it is workable as it is.