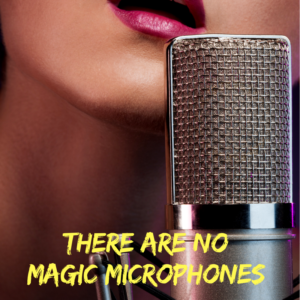 My friend, Bill,  had a problem with his guitar amp and since I had a tube tester, I told him to bring it over, and I would test the tubes, and hopefully be able to get it working again. We got to talking about how some people upgrade the tubes, replace the capacitors and tweak everything to get the “perfect” sound. Then he said, “All they do is mess with the equipment, but never play any music.” It’s about the music. It’s about the music.

Now, some people are into recording because they love working on equipment and the recording part is almost incidental. I get that, and it’s perfectly OK, as long as it’s not an excuse to avoid the hard work of producing something creative and of lasting value.

Equipment is only a means to an end, and what matters most is the creative process and the end result.

A high-end German microphone is not going to fix a voice that needs training and practice.

More plug-ins, better preamps and whatever other equipment you lust after is not going to make up for inexperienced engineering and failure to spend lots of time learning your craft.

I have a friend, Paul, who plays upright bass in a trio with two guitar players. They all sing. They needed a demo and were going to come into the studio, but we had trouble scheduling a time. They finally decided that since they were producing a demo to get more work,  a mono demo would be adequate and they decided to record with a single mike. They spent their time balancing their mix and making it sound good in that one mike. I’m sure they’ll have a more than acceptable demo, and they probably honed their performance techniques a bit in that process. It’s about the music. The people who are booking them for a live gig really don’t care about how their demo was recorded or what mike they used.

If you are just learning guitar, you don’t need a $10,000 classic Martin. A $200 beginning guitar will work just fine. And remember, a guitar player who has been honing his craft for 30 years is going to produce some fantastic music out of that $200 beginner’s  guitar, and a 2nd-year guitar student on a $10,000 Martin is still going to sound like a beginner.

So, it’s really about balance. Find some good music and musicians to record, learn your craft well, and then worry about the fine points of the equipment. We are at a unique place in the evolution of recording technology in that professional quality recording equipment is available at such a low price point that equipment purchase is no longer a large barrier to building a small or home studio. However, just because the gear is capable of great results doesn’t make those results automatic. Like mastering any instrument, learning how to produce good recordings takes lots of practice and time. Purchasing better equipment is no short cut to the process, any more than acquiring a Steinway is going to instantly make you an accomplished pianist.

So, don’t worry too much about that classic German microphone at the beginning. Once you’ve honed your craft for a while, getting better preamps and microphones will be another incremental step in improving your product. No “magic microphone” is going to let you skip the years of learning and practicing.