Most of my effort has been spent building a new control room, and the plan has been to do limited recording in my rec room. There was just not the budget or space to construct a dedicated recording space. My initial though was that the room was quiet enough and acoustically agreeable for a close-miked recording of one or two people.

So, the only thing we really did was to do a bit or re-arranging of the furniture, and run a 12 channel mike snake into the room and run lines for headphone monitoring using an existing Q-Mix box. 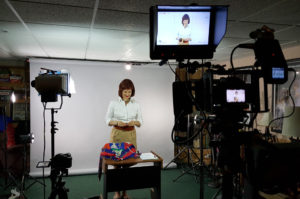 Shooting a segment for The Style Academy with Noelle Cellini.

Also, since I still do some video production, the room needed to stay adaptable for an occasional video shoot using a nine-foot paper background. We did our first video shoot in the space during the early stages of Control Room construction, and this gave me some insight into the sound of the room.

I shot a series of videos for Noelle Cellini of The Style Academy at my previous studio and continue to do that here in my new space. Noelle’s videos are focused on how to dress, and since she may wear several different outfits in the course of a video plus demonstrate accessories like scarves and necklaces, using a lavalier microphone would present a lot of problems. I typically use a RØDE NTG2 shotgun mike placed above and to her left or right, 3 to 4 feet away. I can hear a bit of room sound, but the recording is acceptable. There is just a little more room sound than the old studio, so I was encouraged that this space would work for music recording. 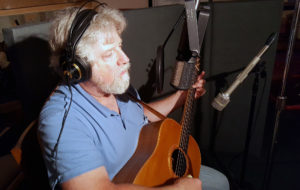 The first real recording test was with Lee Murdock. We didn’t have a lot of time, but I set him up as I usually do, seated, with two Shure SM-81 microphones on the guitar, one right above where the neck joins the body and a second one on the bottom of the guitar body opposite the neck. Then I set up a CAD Equitek E200 for his voice. We recorded a couple of songs, and the results were good with no noticeable coloration of the sound. It’s what I expected, but it was good to verify it. We were both happy since Lee has an album project to record next year.

Then with the Control Room partially complete, I started a project with Danielle and Bill from The Crickets Duo. We recorded Vocals, keyboard, acoustic and electric guitar and ukelele. Again the results were encouraging, with no coloration problems on any of the recordings.

The only thing I am doing acoustically in the room is to cover up the television and a barrister bookcase with blankets since they are highly reflective. I also unplug my wine cooler and turn off the heating and air conditioning while we are recording. As I stated in an earlier post, all of the lighting is LED, so the room doesn’t heat up too much when the A/C is off. 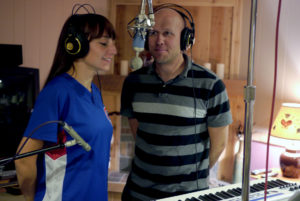 Recording with The Crickets Duo

We plan on pushing the envelope a bit and seeing what is possible in the room. We have a drum recording session scheduled for the Spring, as well as a session with a choir. Look for a report on this in April or May.

So, when the control room is complete in the next month or so what are the plans for this room? We still use this room for entertaining during the Holidays and occasionally during the winter, so It needs to be easily transformable back into a rec room. And since I still do some video shoots down here it needs to be quickly convertible from a recording studio to a video studio and back.

Right now, this is the biggest problem as this transformation takes at least a couple of hours in each direction. My first effort will focus on cutting this time down. Better storage of lighting equipment will help. Also, I currently set up my paper backdrop on stands which is time-consuming. I’ll be looking into a way of hanging the rolls in the ceiling so the paper can be pulled down when needed and then rolled back up into the ceiling when done.

As far as acoustical treatment, I’d like to add some ATS absorptive panels to the walls as well as some diffusers, similar to what I built for the Control Room. I think stuffing the ceiling with fiberglass insulation above the dropped ceiling might even out the low-frequency response of the room and compensate for the low ceiling.

But, at this point, the room is working for what I need. Once I try recording drums and some larger vocal groups, we’ll have a better indication of what we need to do.