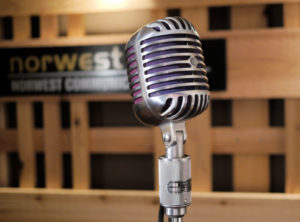 I’m starting to organize some of the stuff I brought from the old studio and found this old Shure Model 556B “Fatboy” microphone that I bought at a flea-market, probably about 15 years ago. It was one of the original Unidyne, 55 series mikes, and I bought it mostly for decorative purposes.

The 556B is the mike that Elvis and others used at Memphis Recording Service during some of their early recordings for Sun Records. (Not this particular microphone, but the same model.)

The 556B that I have is a broadcast mike, whereas the 555 is a general purpose microphone. Bob LaJeunesse tells me that the data sheet has a 1942 date, so the mike could be pretty old. The “B” indicates that the impedance is 200-250 ohms. Strangely, when Shure introduced the Unidyne II in 1951 which is about 2/3 the size of the original Unidynes, they kept the same model numbers for the new microphones. So there was a Unidyne 556 like mine and a smaller Unidyne II 556. Very confusing. The smaller Unidyne II was re-issued several years ago, with a more modern cartridge, and is still available new.

Model number trivia aside, I plugged the mike in this morning, which I thought I had never done, but Kevin Mileski reminded me we used it on his first album – the memory is going. A quick check proves it still sounds really great. Rumor has it that we’ll be using it on some vocal sessions shortly, stay tuned.