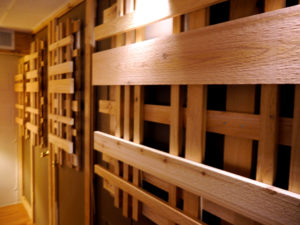 Cedar diffusion structures on the back wall.

Frequency response and evenness in the room are pretty good, but the stereo imaging is still not very good.  I had been in a quandary as to what kind of diffusion I should put on the back wall and was not happy with the options I explored. I found some commercially available molded-plastic diffusers that weren’t overly expensive. They could be painted, but I wasn’t thrilled with the look. What I wanted was wood, but the pre-made diffusers were ridiculously expensive, and I wasn’t happy with the ideas I was having for making my own.

One night I was playing around with some leftover pieces of cedar that we had, and it hit me. I would make a four layer construction of cedar strips, so including the wall it was attached to, there would be five reflective layers or different depths to diffuse the sound. I played around with the idea on paper so that each layer would have approximately the same reflective surface area. 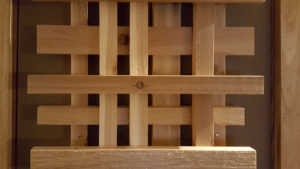 I quickly cut and screwed one together and was amazed how good it looked and how well it fit into the decor of the room. I found that if I built the layers in reverse order, I could put the screws in from the back and they wouldn’t be visible. I bought the wood the next day, and in one evening built the four diffusers, assembled with both glue and screws. I attached them to the back wall and closet doors and then did some listening.

I hadn’t added any diffusion to the right side wall, and I probably didn’t need much since that wall had the equipment racks, an Ampex tape recorder, and a cabinet with a lamp on top. But since there were a few feet of wall that was reflective, I added some strips of cedar with several different layers of thickness. It might have been more for looks than sound, but it looks great and adds a bit of diffusion on that wall.

One other item causing a problem was t

he pipe from the well. Every time the well turned off, the pipe would bang, it also radiated some noise when the well was running. I wrapped the pipe in sound deadening material and added a couple of pipe hangers to make sure it was well supported. I found that the pipe was banging against another pipe in the furnace room, and by supporting both pipes properly, I solved that problem. Finally, I sealed the space around the water pipe and furnace duct where they went through the wall into the control room with spray foam. That cut down on a lot of noise. If the room is quiet, it is still very audible when the well turns on, but if music is playing, the sound isn’t noticeable.

Finally, I installed the last of the equipment in the rack. Nothing critical, but a couple of pieces I use once in a while like a turntable and a cassette player.